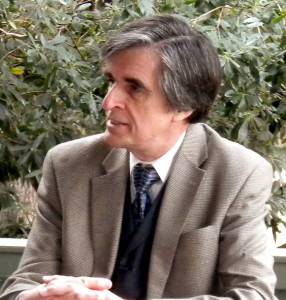 Dear Friends:
Over the years, CfA has pioneered a growing number of different programs related to Waldorf education, from introductory courses and teacher preparation to administrative training and ongoing rejuvenation – seven programs in all. In this issue of our online newsletter, we briefly showcase their latest offerings and most recent innovations.

And we examine a basic right of all students.

In barely a generation, students have reversed the order in which they learn to write and to type. Douglas Gerwin, Executive Director of the Center for Anthroposophy (CfA), explores what happens when keyboard replaces cursive.

The last time I wrote out a major-length paper by hand was during the early 1980s, when I was working on my graduate dissertation. Under pressure of time, I disciplined myself to compose some ten pages per day––or 50 pages a week––so that in eight weeks I had completed a first draft of the manuscript.  To speed the process, I placed a typewriter at my elbow in order, with minimum distraction, to keep a running tab of footnote references and supplementary remarks.  However, notwithstanding impending deadlines, I opted to write––at times to scribble––the body of the dissertation itself in long-hand.

At the time, it was quite evident to me that the tone and style arising from long-hand cursive (or sometimes my short-handed approximation of cursive) were quite different from the more clipped tone and style of the typed footnotes. At some level I was aware that linking one letter to another by hand was helping me construct an argument in which one thought was linked (“seamlessly”, I hoped my dissertation advisor would say) to the next. Footnoting, by contrast, did not require that kind of textual weaving. Only after a final edit did I undertake the weary task of converting the written manuscript into a 391-page typed document.

Were I to engage in such a project today, I would doubtless opt for the convenience of a computer –– not least because of that convenient button labeled “delete”, to say nothing of the time-savers “cut” and “paste”. In retrospect, however, I am grateful that I chose to compose that thesis on a notepad, rather than an electronic Notebook.

Nowadays, in light of government-mandated Common Core standards, I read with alarm how cursive has been dropped as a curricular requirement in many schools (to be precise, Common Core remains silent on this issue), though several states––among them California, Idaho, Kansas, Massachusetts, North Carolina, South Carolina, and Tennessee––have opted to give cursive another look. One reason to be alarmed is that, according to William Klemm, a neuro-scientist at Texas A&M University, writing in cursive makes kids smarter.
below“Cursive writing, compared to printing,” he concludes, is more beneficial “because the movement tasks are more demanding, the letters are less stereotypical, and the visual-recognition requirements create a broader repertoire of letter representation.” His is not the only voice to speak up for the merits of cursive writing, though there are others who challenge his conclusions. But the National Association of State Boards of Education, for one, stands with Professor Klemm: it has issued a report saying that cursive helps develop memory, fine motor skills, and better expression.
belowKlemm’s conclusions are further supported by a study in the journal Current Directions in Psychological Science, which reports that children who practice cursive writing show improved symbol recognition, leading to a heightened ability to read fluently. The study’s published fMRI scans show that physically writing the letters by hand links visual processing and motor experience, thereby strengthening students’ ability to recognize––and later to write––words and sentences.

Writing by hand also improves memory and comprehension among adults. According to a study published in the journal Psychological Science, college students who take notes longhand write less but remember more than those who type their notes on a laptop.

However, even those elementary schools that retain cursive in their curriculum are giving their students less time to practice it. Catholic schools, famous for emphasizing penmanship, are devoting considerably less class time these days to this skill. Instead of getting it for a half hour or so a day––or roughly 7 1/2 hours per week––students may get 15 minutes’ practice three times a week. That comes to less than an hour a week, or a tenth of the time once allotted to this exercise.

Meg Kursonis, principal at St. Peter Central Catholic Elementary School in Worcester, nevertheless points to research that comprehension and retention improves among students who write in cursive. “Students who print or type on a keyboard see individual letters when writing,” she says, “whereas cursive writers see the word as a whole, using the bridges and circular movements to join letters for connectivity. Seeing the whole word also helps them to be better spellers.”

Meanwhile, an online poll by Harris Interactive reports that 79 percent of adult respondents––and even 68 percent of kids, ages 8-18––feel cursive should still be taught in school. Nearly half the adults polled (49%) and more than a third of the kids (35%) said that practicing reading and writing in cursive improved literacy.

Regardless of what schools decide about their curricula, most children these days begin to peck their way around the keyboard of a computer or smartphone long before they enter school and years before they are handed their first pen (if indeed they are handed a pen in school at all). And even when––in some cases we may need to say if––they pick up a pen, a growing number of children don’t even attempt to learn cursive, since they are allowed to remain with printing as they exercise their writing skills. Some teachers worry that students may leave school unable to sign their name in cursive.

What does this developmental switch––from writing or printing to typing or keyboarding––imply for future generations of writers –– and of thinkers? At a superficial level, one could say that they will not be able to decipher great historical documents such as the U.S. Constitution or scribbled notes from a friend or grandparent. In a sense, they may find themselves slipping into a state of quasi-literacy, as happened famously during the murder trial of Trayvon Martin, when one of the witnesses was handed a note while giving testimony but could not decipher it because it was written in cursive.

Much more troubling, however, than the risk of reduced literacy among the rising generations of children may be the effect that a lack of cursive practice will have on the fluency of their thinking. To be sure, it is hard to establish a causal link between fluent or steady orthography and fluent or coherent thinking, but I have heard English teachers swear they can tell from the coherence of their students’ essays whether they were composed by hand or at a keyboard.

No less an authority on the merits of keyboarding than Clive Thompson, author of the book Smarter Than You Think: How Technology Is Changing Our Minds for the Better, confessed in an interview that when it came to organizing his thoughts, he felt the need to set aside his electronic writing tools in favor of pen and paper. “To organize the structure of an argument, I really need paper,” he admitted. “I can use all those wonderful swoopy arrows to connect stuff.”
belowIn Waldorf schools, pupils famously develop their printing initially out of pictures and images –– deriving the letter “s” from the shape of a snake, perhaps, or the letter “m” from the contours of a distant mountain. At the same time, they are engaged in the discipline of repetitive form drawing. By fourth grade they are introduced to the more advanced skill of cursive handwriting, a practice which in some Waldorf schools is cultivated right into high school with courses in calligraphy and illuminated capitals.

Comparative research remains to be undertaken, therefore, on the way a child’s higher mental powers are helped or hindered by the practice or neglect of cursive handwriting, especially during the elementary grades. But we should not have to wait on large-scale or long-term studies to recognize the value to be gained from flowing cursive movements across a blank page, compared to the percussive staccato leaps across a keyboard.

In the meantime, the town of Edmonds, near Seattle WA, has put up a new sign in flowing script. A local newspaper featured a photo of the sign with an accompanying headline: “Welcome to Edmonds – if you can read cursive.”

Once again, CfA’s one-week Renewal Courses will be held online this summer. Karen Atkinson, newly appointed as Coordinator of this popular program, reports on the latest line-up.

Building on previous successes, a new training program for Waldorf leaders and administrators has already created a waitlist, as well as sign-ups for a second cohort.

For the first time, CfA and its affiliate Waldorf program at Antioch University New England are offering their “Building Bridges” program in New England for prospective and practicing Waldorf elementary school teachers.
belowTo date, we have staged this program in Alaska, Yuba and Golden Valley (both in California), and Denver, Colorado. It is geared towards public Waldorf teachers, with occasional independent schools participants who live within commuting distance.
belowThe newly opened Northeast Woodland Public Charter School in Conway, NH has asked us to run this program at their school next year, one weekend per month. Participants can take the one-year sequence (a combination of foundational work and the equivalent of an Antioch first summer) and then apply to Antioch for the remainder of their Waldorf training. If accepted, candidates receive up to seven graduate credits and advanced standing, meaning they can subsequently enter as second-year students in Antioch’s three summer-sequence program.
BUILDING BRIDGES TO WALDORF TEACHER TRAINING

Since its inauguration last year, CfA’s introductory course has gone online as well as expanding into the specialist training of Waldorf administrators and high school teachers. Bev Boyer, Coordinator of this burgeoning program, reports.

Each summer for the past quarter-century, the Center for Anthroposophy has graduated a new cohort of its Waldorf High School Teacher Education Program (WHiSTEP). Here is a brief preview of the subjects being featured online this summer – and an unusual twist to the latest graduating group.

Now in its second year, the Alumni Association for CfA and Antioch alums is planning another round activities, both online and in person. Bev Boyer, who oversees this group, reports on what’s happening.

The last issue of our online newsletter Center & Periphery (Winter 2021) reprinted an extended memorial tribute to Ann Pratt, founder of Pine Hill Waldorf School and an early director of the Waldorf Program at Antioch University New England. In that article, the date of her death was given as 13 January 2021, whereas we learned subsequently from her family that she crossed the threshold on 1 January 2021. We are grateful to Ann’s family for their alert eye.

As a service to Waldorf teachers and administrators­­–both those in training and those who have completed their training-CfA has launched a new page on its website for those seeking employment. Milan Daler, CfA’s Administrator, outlines this new service.